Dave Cowen
Snow Tale is a winter platform-adventure game that was released on January 24, 2012. It is known to be a mix between Liquid Kids and Super Mario.[1] The player controls a penguin on a journey through a winter land.

To destroy any enemy in Snow Tale the player needs to freeze that enemy with a snowball and kick them into a object or kick a frozen enemy into the enemy the player wants to kill.

The winter game was first previewed through an image of sketches on the Neutronized blog. It revealed some of the basic controls and characters for Snow Tale, as seen below.

After a month of waiting, Neutronized released another preview image of Snow Tale. It appeared to be almost finished in development.

On January 19, 2012, a trailer for the game was released, finally mentioning the name, Snow Tale. This revealed more of the basic mechanism used in the game as well as some of the pickups and enemies. 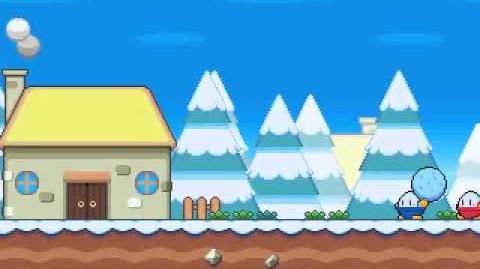 Retrieved from "https://neutronized.fandom.com/wiki/Snow_Tale?oldid=13038"
Community content is available under CC-BY-SA unless otherwise noted.